Normally, tax day every year is Buy A Gun day. This year was a bit weird because tax day was officially delayed until May 17.

Also, I was really kind of hesitant to post my BAG day purchase just because of the current political environment, but the bottom line is, If my past activities and posts haven’t gotten me onto some kind of “domestic extremism” watch list, this isn’t going to put me over the top, so here goes.

After the Democrats stole the election for Biden, I decided I needed increase my stock of “ban resistant” firearms. My standard everyday carry piece is a Glock 19, but with a 15 round mag, that could be problematic in the near future. Yes, there’s a good chance that existing guns at the time of the ban would be grandfathered, but it’s possible they may not be as well and I figured if I wait until after a ban is passed, it could get really hard to find something that would fit the bill. Better to buy it now, while I have the chance.

So I started researching. I wanted something small…like small enough to use with a pocket holster…but with enough oomph to get the job done. Most people consider .380 the smallest caliberThe bullet or Bore diameter of the gun -... More suitable for self defense, and I’m sure under most conditions, it would get the job done, but I wanted something that packed a bit more punch than that. There are a plethora of choices out there in subcompact 9mm guns so that’s where I wanted to go with it.

A friend of mine likes his Glock 43, but the barrel’s still got that blocky Glock profile and it’s only two tenths of an inch narrower than the Glock 19. That’s not much improvement when you’re giving up 9 rounds of capacity. Pretty much everything else I found that was low cap and small enough for me have the tiny little manual safeties on them. That doesn’t bother me in and of itself, but I’m left handed and I didn’t find a single one with an ambidextrous safety, plus they are so tiny and hard to manipulate, I don’t like the idea of having to try to manipulate it with the wrong hand under stress. One could just leave the safety off all the time, but that’s just another potential point of failure…what if it accidentally gets engaged, then I’m not trained at all to disengage it and under stress could mean the difference between life and death. Not gonna chance it.

One that really caught my attention was the Ruger EC9s for its diminutive size. The problem is, it has a right handed manual safety, plus the sights are machined into the slide, so no replacing them with night sights, and to top it all off, a magazine disconnect safety…that’s a deal breaker for me.

Too bad they don’t make them without all that crap….oh, wait. The EC9 is actually a less expensive version of an older design, which they made a variation that’s exactly what I’m looking for.

Since they aren’t in production any more, I had to search a bit to find one, and probably paid more than I should have, but it’s what I wanted so…here you go: 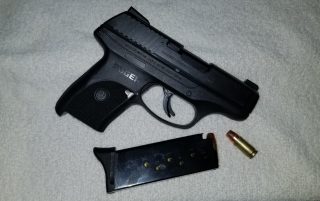 7+1 capacity so obviously impossible to use in crime or mass shootings. Chambered in 9mm Luger. Less than an inch thick. No magazine disconnect or right-handed manual safety to stymie me under stress. “Standard” sight bevels (I had the tritium night sights purchased and delivered before I even took delivery of the gun). It simply disappears when carried in a pancake holster and slips easily into a pocket holster for “grab and go” situations. Exactly what I was looking for and I’m extremely happy with it so far.

The only thing is that I haven’t had it out to the range yet. I’ve tried it with my laser training system and it points and feels just fine dry firing, but I haven’t fired live ammo through it yet. Just been too busy. I imagine that, as small as it is, it isn’t going to be exactly fun to shoot. I do typically use 147 grain subsonic ammo, so that will help, but I’m betting that the muzzle flip and recoil are still going to be…um…energetic. But we’ll see. I’m kind of a recoil junkie anyway so unless it causes physical pain to shoot, I’m thinking it’s still going to be fun. I’ll let you know…hopefully soon.

Next I need at least one more ban resistant long gun. I’m thinking maybe a lever gun, I’ve always liked them, or you can never go wrong with a bolt action.