I’ve never been so happy to be wrong in my life.

I was convinced that the democrats would cheat their way to victory in the Virginia Governor’s race.

The polls were showing it as basically a dead heat. For the past 10 or 15 years, all polls have skewed democrat by a big margin so if they said it was a dead heat, my estimate was that Youngkin actually was up by about 10 points.

That was borne out in the results early on, Youngkin had about a 10 point lead…then the cheat machine kicked in.

Fairfax had a “glitch” and had to rescan a bunch of votes.

While many counties have promptly reported their election results, however, deep-blue Fairfax County has missed the deadline to count early votes and has announced it needs to “rescan” the ballots.

Nope, nothing fishy about that at all right?

Oh…and it wasn’t the election officials that initially reported this development – it was the McAuliffe campaign that first reported it to the media.

Jackie DeFusco of WRIC-TV added that according to McAuliffe’s campaign, “a portion of the early votes in Fairfax County need to be rescanned and there is no set timeline for that yet. His staff says that could delay the results.”

Nothing suspicious there at all either right?

And, magically, shortly after this announcement, Youngkin’s lead began to shrink…but apparently they just weren’t able to manufacture enough votes to overcome the Republican’s huge advantage. Not enough cemeteries in Fairfax County I suppose.

The final tally was Youngkin by a little less than three percent. Which means the actual margin, when the manufactured votes are taken out of the mix, was probably more like 10 or 12%…bigger than the margin of cheat was able to overcome.

But the important thing is that we no longer have an authoritarian, racist, communist in the Governor’s mansion, and the downstream races seem to have had similar results.

By the way, I loved this point made by Miguel over at the GunFreeZone: 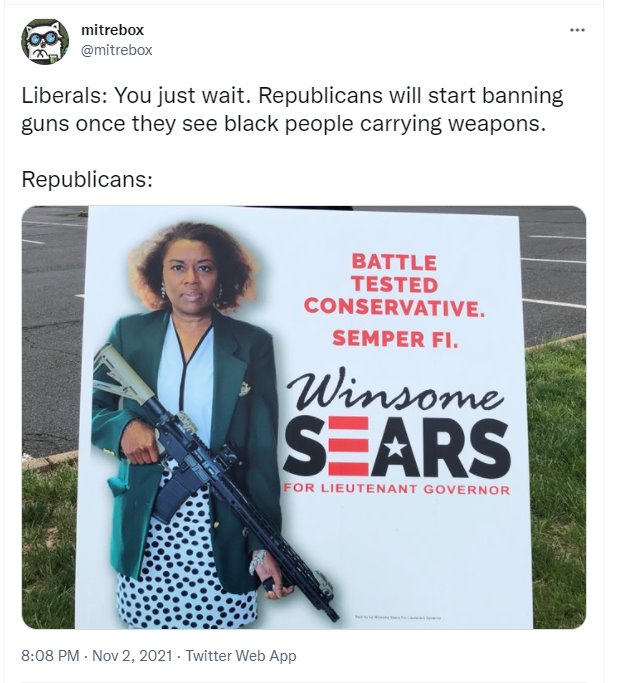 Yup, we Republicans are so fearful of black people with guns that we elect one of them to be our Lieutenant Governor.