I’m back from my trip to the mountainous wilds. 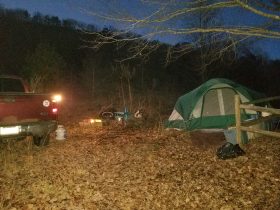 My plan for this trip didn’t work out exactly as I’d hoped. When I’d been out to the property before, I’d thought I could get my truck all the way up to where the electrical meter and well pump were located, unfortunately, I wasn’t able to do so because the “driveway” was blocked in several areas.

I did go out to the electric company and talk to them. She said it would be a good idea to have one of their people come out and look over the lines, transformer, etc that feed the property and make sure everything is OK before trying to start service. Unfortunately, no one was available for that trip, so after I get my next trip scheduled, I need to set up an appointment with them so someone can meet me out there. If that all checks out, then I should only need a “reconnect inspection” to get the meter turned on.

One good thing I did discover is that the meter panel that’s out there already has a 200 amp master breaker, a 20 amp double pole breaker and three more open spots, so it doesn’t look like I’ll have to replace that panel after all. When I saw it before, I didn’t open it up and I’d thought it was just a meter panel. I’m glad I was wrong about that.

But that’s as far as I got with the electric this time.

I drove over to the across the road neighbor and introduced myself. Nice guy. We had a good conversation and he told me some of the history of the property from his perspective. 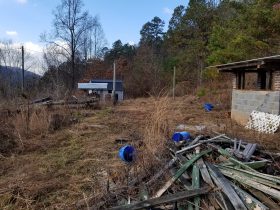 The existing meter and well pump are at the level on the property where the most recent resident had his trailer.

The trailer was on the left, the well pump house is on the right, you can see the shed and power pole in the distance. At some point someone started trying to build a small cabin on a section of the area where the trailer was. They only got a couple of rows of logs down before giving up, but that’s what that mess is beside the firewood shelter. There’s also a bunch of wood and junk laying around from who knows what.

Anyway, what the neighbor told me is that after the trailer was brought down from there, the owner was having problems with people coming out to the property to party (hence where the huge amount of beer bottles and such scattered hither and yon came from). To bring that to a stop, he rented a bobcat and pushed dirt up in the driveway in places to create berms to prevent vehicles from getting up there. He also drove some rebar poles into the ground and piled scrap wood and such from the burned down house in the way. I hadn’t realized how inaccessible he’d made it when I was out there before. As soon as I tried to get my truck up there, I realized it wasn’t going to happen.

So, next time I go out, I’m going to rent a bobcat and undo all the stuff he did and thereby make the “top” area where the trailer was accessible again. Once that’s done, that will become my camping area and work on the well pump and electric can begin in earnest. 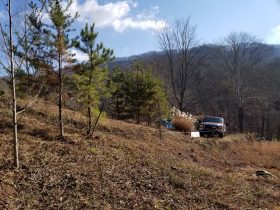 So this trip I spent mainly doing some brush clearing including using the winch on my truck to yank a couple of small pine trees that had grown up in the “driveway” out so I wouldn’t have to worry about that later.

I also did some more exploring, and took the opportunity to set up my chronograph and test some .45-70Straight Walled, Rimmed .45 caliber rifl... More loads I’d been working on. 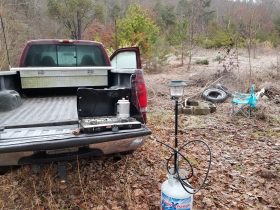 I do think we’re going to get a camper if I can find a used one relatively cheap. After we get a fence and gates along the road, we may just leave it there so we don’t have to haul it back and forth. I’ve always enjoyed tent camping, but I tend to only camp once or twice a year. I have a feeling that doing it once a month for several years is going to get old quick. Plus the temps were getting down into the 20’s at night…the tent got pretty chilly and every morning I was waking up to frost on everything. Makes getting the morning coffee on that much more important.

Anyway, that’s the update. Until next time…