Thanks, IKEA, for making my decision that much easier.

Our new-to-us old camper has an old mattress in it that’s seen better days. It’s functional, but it looks to be the original mattress and is worn and torn in a couple of spots. We decided to replace it.

Of course, it’s just a little bit smaller than a standard “full” sized mattress. A standard full would probably fit into the space, but it would be tight and would be difficult to put sheets on and such.

So, in shopping for a new mattress, I noticed that Ikea has mattresses that’s dimension, because they’re actually metric, come in at just under the standard full size, which might just meet our needs. It would almost fill the space completely, but shouldn’t be so tight that we can’t pull up the edges to put on sheets.

As an added bonus, there’s a relatively new Ikea store in Norfolk and they have the mattresses we’re interested in in stock so we can actually go to the store and try them out to make sure we’re going to like the firmness and such.

But, before we went, my wife started checking into their Wuhan Flu policies. She has some medical concerns that make wearing a mask problematic. She doesn’t have any kind of official paper or written diagnosis to prove it, but it’s a problem, so she checks these things out ahead of time. What she found on the main Ikea site was this: 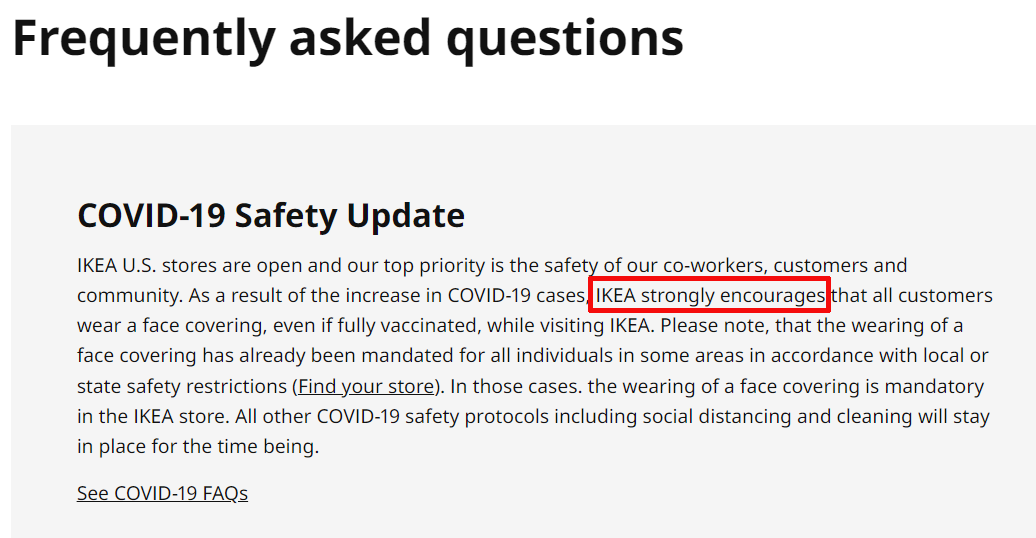 Masks “strongly encouraged” (I added the red box for emphasis). They do say check the policies at your local store, so she did that too.

So, we’re good. She won’t be required to wear a face diaper right? 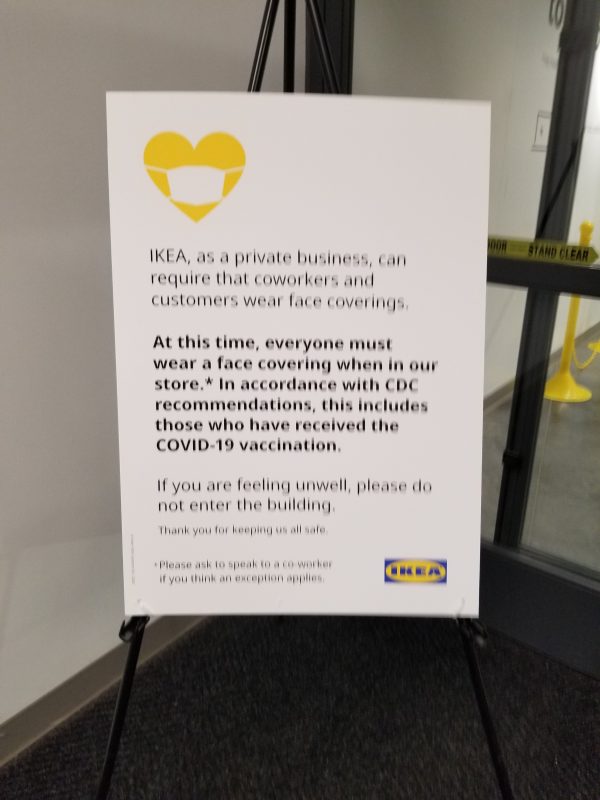 “IKEA, as a private business, can require that coworkers and customers wear face coverings.

At this time, everyone must wear a face covering when in our store.* In accordance with CDC recommendations, this includes those who have received the COVID-19 vaccination.

They are absolutely correct, they are a private business and can require their customers to wear funny hats, green socks and orange shirts to enter the premises if they want to.

And we are private citizens who can chose to spend our money elsewhere. So we will.

So, again, I say thanks to IKEA for making the decision on where to spend our hard earned money that much easier.

The interesting thing is, if their website had been accurate and we’d been forewarned what to expect, there’s a good chance we’d have discussed it and decided that, as long as we limit the time we spend in there, she could tolerate wearing the mask long enough to go in, check out the mattresses and get out, and then she could wait in the truck while I went back in to make the purchase. What really caused us to just completely write them off was the fact that they took us by surprise by saying one thing on the website and another after we’ve already traveled almost 20 minutes to get to the store.

Needless to say, not only did IKEA miss out on the $500+ dollars we would have spent on a mattress and mattress pad and waterproof cover and sheets and pillows and a blanket or two, they’ve lost us as customers forever. My wife loved their store layout and enjoyed shopping there before this (honestly, I’ve never been a fan of their store layout and the quality of their products is…um…questionable at times…not to mention they’re anti-gun), so they’ve lost a loyal customer and many, possibly tens of, thousands of dollars in sales.

Granted, as a big chain IKEA isn’t going to give a rat’s patootie about losing one customer, but in my experience when loyal customers start getting annoyed enough to swear off a company, trouble isn’t far behind.

Goodbye IKEA, it’s been (notso)nice knowing you (see what I did there?).