So, as I mentioned in my last update about the remote property (my wife and I have decided to start calling it “the estate” so we sound all hoity toity when we’re talking about it…maybe I’ll start doing that here too), we decided we need to get a camper to make staying there while we’re working a bit more comfortable.

I started looking and found a a couple of likely candidates right away, however one really stood out so I went and took a look at it on New Year’s Eve. It was on consignment at an RV dealer north of Richmond so it was about a two hour drive from here, but it was worth it. 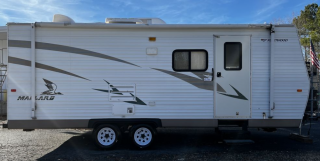 For its age it’s in excellent condition. There are a few minor issues they’re going to fix for me before I pick it up next week.

They’ve already replaced the awning fabric which is ripped in the picture…it’s brand new now.

50 Ga fresh water tank with 40 Ga gray and blackwater tanks. Two propane tanks for a total of 60 Ga. Everything but the A/C, fridge, water heater and microwave can run off the battery and the fridge and water heater will work off either 110v or propane. 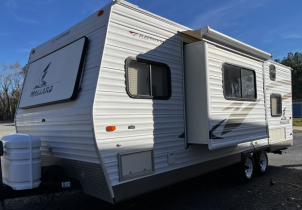 It has one small slideout in the back for the sofa.

There are some minor dents and dings and there is one external trim piece that’s missing that I’m not sure a replacement is available for. I’m going to call the maintenance guy who’s working on it tomorrow and talk to him about it, he couldn’t find out on Friday because their parts suppliers were all closed. If all else fails, it will be covered up with the universal redneck cure-all…white duct tape.

The inside is clean although it’s obviously used and has some wear. 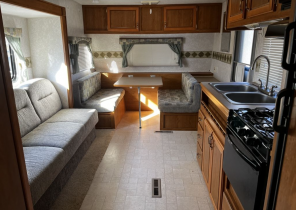 Most of the wear is cosmetic. things like curling edges on the wallpaper trim, a scratches and marring of the wood surfaces etc. The functional elements are all in excellent condition.

All the fabric cushions are in great shape, all the drawers open and close smoothly. There is one cabinet latch broken that they’re going to fix. All of the appliances look brand new and work great.

Even without the slideout extended, there’s plenty of room inside…with it extended, it’s downright huge in there.

I really wasn’t looking for one with a slideout, if for no other reason than because it’s just something else to break, but this one is fine because, as I said, even without it extended, there’s still plenty of room, so if it does break…no great loss. The maintenance guy told me (and he struck me as one of those brutally honest guys…he told me at one point “I’m not the salesman…my job is to make sure you’re happy with it when you pull it off the lot” and he pointed out several of the issues that need to be fixed that I hadn’t even noticed) the newer RV slideouts aren’t nearly as well built as the older ones and are often points of failure. He said the type of mechanism in these older RVs is very well made and virtually “bullet proof”; so I’m not nearly as worried about it at this point.

It also included an anti-sway, weight distributing hitch. It only weighs about 5k lbs (4.2K dry – 6.4k Gross) so I’m not sure I’ll need it with my truck, but that’s nice to have anyway.

The asking price was reasonable but at the high end of that, so I got them to call the seller (it was a consignment as I mentioned) and negotiated them down to $900 below the original asking price. I wouldn’t call it a “steal” but it was a fair price for the age and condition of the unit and was within our price range.

I think we did OK.

I don’t have room to park it here in my city house, but the Navy Morale, Welfare and Recreation (MWR) department has an RV storage area on the base that’s open to retirees and is very inexpensive. We’ll keep it there during the time we’re dragging it back and forth. After we get some security arrangements made on The Estate, we may just leave it out there for the duration. We’ll see how things go. It may be better to just keep it here so we have access to it if we ever decide to use it for a vacation elsewhere. We’ve been talking about a trip to the Grand Canyon for quite some time. Maybe next summer (2023). Probably need to make RV park reservations a year in advance for something like that anyway. I’ll check into it.