When moving into the farmhouse that my parents raised their family in, my dad discovered an old clock in the attic. The face was stained, the hands bent and it didn’t run, but it was a beautiful old clock and Dad loved it, so he took to the local clock guy in our small community to try to get it repaired. The face was cleaned up as best it could be and the hands straightened, but alas they couldn’t get it running.

Even so, dad loved that clock and it sat in a place of honor in our family room for my whole life.

After Dad passed and mom sold the farm, she asked me if I wanted the clock and I took it eagerly. It has since sat on the mantle of my fireplace for many years. The only problem with it is that it’s a bit tall for the Mantle. I’ve got a painted saw above the mantle (that I bought from my dad’s antique shop before he passed) and the clock was in front of part of the saw, but I still kept it on the mantle.

I’ve always loved old clocks like that and I really like the round top mantle clocks you see now and again. A couple of years ago for Christmas, my wife found me a round top mantle clock that is in beautiful condition. She bought it on one of the online sale sites and got it for a very low price. The only caveat is that the guy she bought it from said it needed to be cleaned because it didn’t run reliably.

I moved the old family clock into my office and the round top clock took it’s place on the mantle (and fit much better), but it sat for several years before I finally got around to researching clock repair places in the area. I finally settled on a guy who’s been in business since 1980 and has a good reputation. His son also works in his shop and will someday take it over. The guy’s name is Steve Long and his business name is The Time Machine in Virginia Beach, VA; I highly recommend them if you have an old clock that needs attention. They do house calls to service grandfather clocks and such as well.

At any rate, I decided, while I was getting the new clock serviced, I’d take him the old family clock as well to see if he can do anything with it. From the get-go, he was very confident he could get it running again. He had a 4 month backlog so it was quite a wait, but yesterday, I dropped by there and picked up my clocks. I can’t tell you how happy I am with the work he did and the level of service. 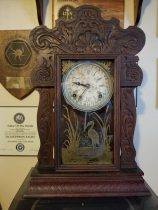 The old family clock is a “gingerbread” style mantle clock with a Sessions movement (click to make bigger). The face is not original because it’s not a calendar movement, but it’s got a calendar face. The face is also very stained. It’s metal so there’s only so much you can do to clean it up without wearing away the numbers and such. This clock has a lot of sentimental value so I didn’t want to alter it too much. He could have replaced the face and the hands, but I asked him to leave them the way they are…the way they’ve always been in my memory.

He found that someone had replaced the mainspring at some point and replaced it with the wrong size (the guy my dad took it too all those years ago?). It was binding up and that’s why the clock wouldn’t run. He put the right size mainspring in it, cleaned it up and lubed it and now it runs like a top.

He also gave me some information about the clock including that it was made sometime between 1902 and 1920, so it’s over 100 years old. I’m so happy to have it running again after all these years…and I know my mother’s going to be ecstatic that he was able to get my father’s favorite clock going again. 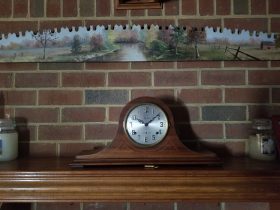 The second clock just needed to be cleaned and lubed.  It’s also a Sessions movement, from the 1940’s or ’50’s.  It looks really nice on the mantle and fits much better than the taller one.  It’s got a Westminster chime in addition to the standard chime on the hour.  It will take a little getting used to it going off every 15 minutes, but the tones are pleasant and not too loud so I don’t think it will take much getting used to.  It also has a switch to turn off the chimes if they get to be too much, but I don’t think it’s going to be an issue.

That metronomic tick tock is a soothing memory from my youth as virtually every home had at least one (often several) mechanical movement clocks in various rooms of the house.  That’s something that’s missing from modern homes with quartz movement or digital clocks.

I’m not a clock collector or aficionado of any kind, and I doubt either of these clocks are overly valuable to collectors, but I like them and both of them have special meaning to me so I’m very happy I was able to find someone with the skills and knowledge to get them running properly again.

1 thought on “A tale of Two Clocks”