If you’ve been reading at my old blog location, you already know that I decided to cut the blogger apron strings and move to my own site as a result of the new Google privacy policy.

I still hope that Robb finishes Ansible at some point so I can switch to it, but in the meantime, WordPress will have to do.

As threatened, I did update my theme, partly because I didn’t feel like trying to learn enough about WordPress Themes to match it exactly, but also partly because the old theme was just getting…well…old.

Feedback on the new header image and general format are welcome and appreciated.

As you can probably see by the dearth of information in the links and the lack of other sidebar content, this is still a work in progress, but I think I’ve gotten enough done to bring it online.

I did import all my blogger posts over here, so all the content that was available there is available here, and I set my blogger template to redirect to here.  Eventually, I’ll delete that blog completely, but there are still a bunch of links out there to my “how to” posts and I don’t want to just break all of those links.  I do find it satisfying that all those people find my stuff useful and don’t want to leave them in the lurch.

At any rate, I’ve moved, so please update your bookmarks and, if you have a link to me in your blogroll, please update to the new and improved Captain of a Crew of One at https://sailorcurt.com

I have a private url and plenty of server space that I’ve been renting for over three years, and I’ve thought, off and on, about moving my blog over there and hosting it on wordpress or whatever (I’d buy Ansible to use, if Robb would ever finish it).

Looks like it’s time to evacuate my bowels or unseat myself from the lavatory.

The Web giant announced Tuesday that it plans to follow the activities of users across nearly all of its ubiquitous sites, including YouTube, Gmail and its leading search engine.

Google has already been collecting some of this information. But for the first time, it is combining data across its Web sites to stitch together a fuller portrait of users.

Among the google products I use are Youtube, Blogger (and the linked photo hosting site Picasa), and I recently opened a Google + account for no particular reason (I wanted to see if it’s better than facebook).

All of those things have non-google alternatives and I actually already have accounts with alternatives to all of them but blogger.  All I need to do is set up blogging software on my domain, move my blog over to there, and cancel all my Google services.

I’ll let you know when my url changes.  It would be a shame if my readers (all three of you) couldn’t find me any more

It may be a little while because I don’t have a lot of spare time to do these types of things, but it will happen.

Maybe I’ll go for a little re-design while I’m at it.  Heck, this could be the impetus I need to get back into blogging regularly…who knows.  Stranger things have happened.

Up at 0345 again in the morning for the start of the All Navy rifle and pistol matches.

It’s gonna be quiet around here again for the next few days.

The Women on Target class was a blast. I loved the rifles and I loved the pistols. I just plain loved the shooting!

Head on over and welcome her to the community.

I just signed up for twitterfeed which is supposed to direct new blog posts to twitter.

Consider this a test.

Molly Smith, 12 year old Steel Challenge shooter blogging at The Molly Minute. A taste of her first post in January:

For my very first blog posting I want to ask the question what is beauty? I wonder how many people would think that a 12 year old, shooting steel targets or anyone else shooting a gun for that matter, could be beautiful.

When I think about the people I have met shooting, dusty and dirty, big goggles, earphones, hats messing up their hair, and those weird poses and faces they make when they are aiming, I know they are beautiful. They don’t care what they look like on the outside, they are focused on the inside, they focus on shooting the best they can, and focus on enjoying the sport of shooting. The fact that they don’t care if their hair’s messed up, is beauty in itself! They make me want to be the best I can be. I’m lucky; I’ve found beautiful people at a very unusual place, the shooting range.

Not only can she shoot, she writes well and is wise beyond her years. Read the Whole Thing, as they say.

She and her family are reportedly going to be at the Gun Blogger Rendezvous this year too. Makes me wish even more (if that’s possible) that I could afford to go this time. Someday.

Drop by her place and leave a word of encouragement.

Hat tip to Mr. Completely, founder and organizer of the Gun Blogger Rendezvous.

A couple of days ago, Bitter, on Sebastian’s blog “Snowflakes in Hell”, noted that:

This is the second time in a month that Jim has used the blogosphere as a scapegoat for the rumor mill when I could find no evidence to back up the claims. If any readers find evidence that the blogosphere was responsible for spreading rumors about the demise of Daniel Defense this weekend, please share it, and I will make the correction. In the meantime, I find the claims dubious.

The first thing I thought when I read it was “I wonder if anyone has mentioned this to Jim? I met Jim Shepherd at the NRA Meetings in Louisville a couple of years ago ***edited to add: which meeting Bitter initiated and organized at considerable effort, for which thanks is due*** and he didn’t strike me as the kind of person to throw ANYONE under the bus without good reason.

So, I fired off a quick e-mail to Jim with a link to Bitter’s post and asked if he had any comment on it.

Within hours, he replied to both me and Sebastian that it was all a big misunderstanding. He accepted full responsibility for his “inexact” usage of the term blogosphere and assured us that he’d clear it up in today’s Outdoor Wire.

True to his word, in today’s “Outdoor Wire” feature:

Having heard from a couple of bloggers yesterday, I am going to plead guilty to an inexact application of the word “blogosphere”. Some of the very people I’ve characterized as the future of communications feel – justifiably – that I’ve tossed them under the proverbial bus recently.

That’s not the case. What I have done is use a term of art (blogosphere) as shorthand for all the myriad of internet communications. When I received nearly 100 emails and forwards of excerpts of a single report – and dozens of associated rumors- regarding Daniel Defense, I wrote that the “blogosphere was roiling”. A more accurate depiction would have been “rumors have been flying regarding Daniel Defense across the internet”. It was an unintentional shot at a group of individuals who I really do regard as integral parts of information distribution.

Several of the bloggers have called me to account on this one – and I have to plead guilty with a stipulation. It was inexact word usage, not intentional criticism. Calling me out on this one actually makes me feel better about accuracy in new media. Now, if I could only get someone in “old media” to take offense when I accuse them of unbridled bias….

Kudos to Jim Shepherd for accepting criticism without rancor or defensiveness and clearing the issue up quickly.

And perhaps we bloggers could take a word of caution to heart as well: Maybe, versus jumping to conclusions and excoriating our presumed allies in public right out of the gate, we should contact the person with whom we have a gripe and see if it can be worked out, BEFORE employing the “nuclear option” of airing our dirty laundry in public.

A day when you get linked by at least 5 other gun blogs can have a serious impact on your hit count. 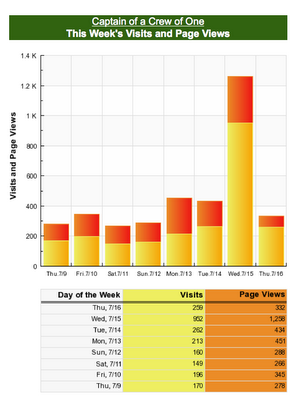 Thanks to everyone for the linky-love yesterday.

…but it seems to me that blatantly stealing the intellectual property of a Law Professor just isn’t the brightest move one could make.

The Volokh Conspiracy
My Legal Spot 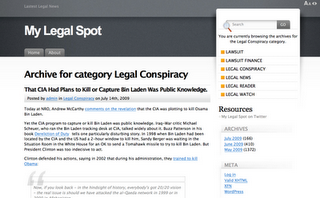 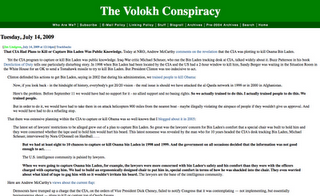 I wonder how that’s gonna work out for Jenny Francis.

…that blogger is no longer formatting correctly all the sudden?

When I create a post in “compose” mode, when I use blockquotes, it doesn’t separate paragraphs unless I put two blank lines between them versus one.

When I go into “edit html” mode, the paragraph tags are correct, but after publishing, there’s no blank line between graphs any more. There used to be. This is a recent development. It smushes everything together and makes it hard to read.

I’ve noticed this in blogger comments too. When I’ve commented recently, it’s smushed the paragraphs together versus putting a blank line between them.

So now I have to remember, whenever using blockquotes or commenting through blogger, put two line breaks in between paragraphs to get it to look the way I want after publishing…sigh.

At first I thought it was Firefox that was interpreting the HTML incorrectly, but it does the same thing with IE.

Has anyone else noticed this or am I going crazy?