I have been a faithful patron of Delta for many years, am a Silver Medallion member, and have always felt welcomed and appreciated; however after recent events I no longer feel that way.

Following the tragedy in Florida, a vocal minority pointed fingers at the NRA, blaming an organization of over 5 million people for the act of one unbalanced individual. The fact is that the NRA has consistently advocated for current laws to be enforced vigorously in order to prevent tragedies like what occurred in Florida from happening. The NRA’s urgings have obviously fallen on deaf ears as the enforcement failures at multiple levels of government increasingly come to light.

In spite of that this vocal minority has managed to convince Delta to rescind an offer for discounted fares to the annual meeting.

The only conclusion I can draw is that Delta agrees with the vocal minority and places the blame for this tragedy on NRA members, of which I am one.

Therefore, short a convincing explanation, sincere apology and reversal of this decision, I cannot, in good conscience, continue to patronize a business that views me in such a negative light.

This action is not without sacrifice on my part. In my line of work, I tend to travel quite a bit. Perhaps not as much as some, but much more than the average person. I have several long trips in the offing, including at least one trip to Germany and three trips to Honolulu this year (during one of which I plan to take my wife). It is a shame that I will have to fly on an airline that provides (in my view) inferior service and will have to eschew the loyalty miles I’ve built up to this point, but my conscience will not allow me to patronize a business that would impugn me and my associates in such a way.

[update]
I just bought the tickets for my first trip to Hawaii for the year. Cost over $1000. Guess which airline didn’t get that money?

This edition of Where in the World was Sailorcurt actually takes us outside the United States (that’s a hint) and will be MUCH more challenging (and I think the next one is going to be even moreso).

Since this one is going to be more of a challenge, I’m going to double the prize. The first person to guess what city I was in will be awarded 2,000 internet points. 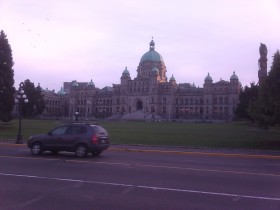 [update]
OK…nobody’s gotten it yet, so let’s add another hint. This is the same building from another angle, but the added element in the foreground may help. 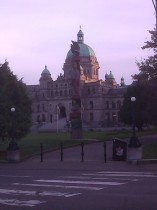 The Totem Pole was actually in the first picture too, but off to the side so it may not have been noticed.

Sorry for the delay in updating: Holidays and all that…

OK, if no one gets it after this one, I’ll tell.

Another landmark from where I was. 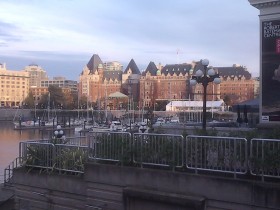 Down Range of what, you ask? Well, let’s see if this jogs your memory: 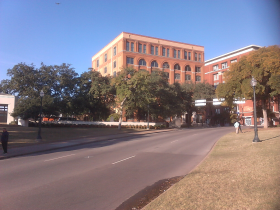 How about this one (I didn’t take this one): 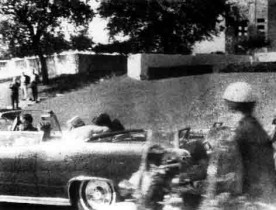 Yep…that’s Dealey Plaza in Dallas, the site of the assassination of JFK. The picture in the first post is the “grassy knoll” that the conspiracy theorists believe the “real” assassin fired from, the second is the Texas Book Repository from which the actual shots were fired.

I’d actually done a research paper on the Kennedy assassination in college. I researched the Warren report and various conspiracy theories. My final conclusion at the time was that there were some oddities with the investigation and other aspects of the case, but that the odds of a cover up were very small. The theories about the shots coming from the front just didn’t hold up ballistically, either from the autopsy reports or the videos of the actual incident, additionally, there simply would have had to have been vastly too many people involved to pull something like that off and keep it quiet for decades.

One of the conspiracy theories opined that the shots were way too difficult for Oswald, a reportedly mediocre shot, to have made.

After visiting the repository and seeing the view from where he made the shots, I have to strongly disagree. The shots were taken at a range that any half-way competent marksman could have made.

Anyway, Dallas it was. I hereby award RWH 1000 internet points. Spend them wisely.

OK. I was only home from Seattle for a couple of days before leaving again. I just returned from another trip. This one should be pretty easy for the demographic that would read my blog. 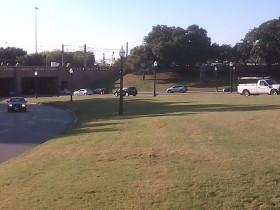 Any ideas where I was? 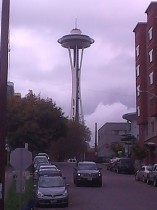 I think I’m going to start a new theme. I did this a while back when I was in Toronto, I posted a picture of the CN tower and asked people to identify where I was.

I travel a lot for work and I don’t like posting about it while I’m gone…don’t like announcing to the world that I’m not home, I don’t advertise my address, but it wouldn’t be that hard to figure out.

But after I get back from a trip, I can say where I just was. I may start doing this more often.

I just returned from a trip. Let’s see if you can guess where I was from this picture taken a block or so from my hotel (click to make bigger). 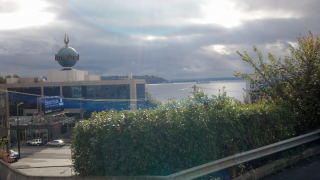 One thousand internet points to whoever gets it first (assuming, of course, there are still a few people checking in here occasionally).

If no one gets it from this picture, I’ve got another that’s a dead giveaway.